The Memorial Center of the second world war concentration camp Westerbork was opened in 1983, a few kilometers west of the camp itself. In 1992 the camp grounds were laid out in a more symbolic way. Very little of the camp remained, only the potato bunker, the SS bunker, the house of the camp commandant and the water treatment plant. Camp survivor Ralph Prins designed the impressive memorial monument.

In 1939 a camp was set up here for exiled German Jews on a barren piece of land measuring 500 by 500 metres. After the German invasion of the Netherlands, the approximately 140,000 Jews living in the Netherlands were further isolated from community life. This was a portent of the coming deportations to the death camps in Poland. The Nazi’s needed a transit camp, and that is what Westerbork became. The camp was open to the wind, and sand and waste from the heath were driven into the cracks of the wooden barracks. From 1st July 1942 Jews in the Netherlands were transported from here. First 24 trains with 23,700 Jews, then from the beginning of 1943 a weekly timetable: every Tuesday a train with 1,000 people in goods wagons. Destination Auschwitz or Sobibor. The last transport took place on 13th September 1944. In total there were 93 trains with more than 100,000 Jews, and among them 245 gypsies.

After the liberation on 12 April 1945 the camp continued to be used for interning Dutch collaborators, for receiving repatriated soldiers from the Dutch East Indies and for Moluccan soldiers of the Dutch East Indian army. It was only in February 1971 that Camp Westerbork ceased to be a place where people lived. The area is now largely covered in woodland and it is the site of the large radiotelscope of Westerbork. 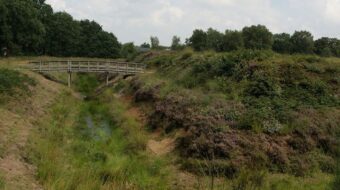 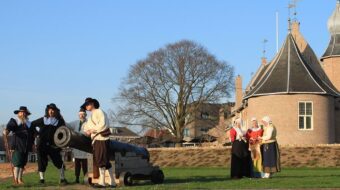